Nuclear Power: From Fearful to Future

As the world progresses toward carbon-neutrality, nuclear is an option that deserves greater consideration and federal support. Technology today is on the cusp of making nuclear both economically and environmentally viable.

It’s generally accepted that if you’re not looking forward, you’ll eventually fall behind. Businesses everywhere are consistently moving with and adjusting to the surrounding circumstances to stay afloat. Lately, in the energy industry, it seems that if you’re not thinking about clean energy, you’re less likely to progress in the right direction.

$ Billions are being invested into green energy as the demand for it increases and American businesses work to meet federal and state climate goals. To meet this demand, there are quite a few options for consumers to choose from. Each energy source has its own capabilities, reliability, and costs. Power suppliers currently have both the government and consumers pushing for clean energy and nuclear seems to be the source of choice.

Nuclear energy will arguably be borderline necessary to meet the carbon goals set for the United States.

Reasonably, nuclear energy has not had the most favorable public opinion in the past. Very few people are flushed with positive feelings when hearing the terms ‘nuclear’ or ‘uranium’. However, with modern advancements, nuclear energy is safer and more advanced than it’s ever been. Now, as we are faced with intensive carbon emission expectations, nuclear is crucial.

Recently, nuclear has been making a comeback from a fearful fuel to the future of a carbon-neutral America. Despite declining for the previous two years (2020 and 2021), this year the US Department of Energy is pushing for support of nuclear power and nuclear technological advancements. As concern for our climate grows, lawmakers across the United States are examining the role nuclear power plays in our grid. For example, on May 19th the Michigan House of Representatives passed a bill requiring a study on nuclear energy generation in the state (1).

Michigan is not alone in this exploration of the potential of nuclear energy. Other states considering legislation to conduct nuclear studies are: Kentucky, Minnesota, Nebraska, New Hampshire, New Jersey, Ohio, and Oklahoma. On a federal level, senate lawmakers introduced legislation to develop a nuclear export strategy.

Despite this, nuclear has had a difficult past few years as plants across the United States have been shutting down. Nationally, nuclear generation decreased slightly by 0.9% from March 2021 to March 2022. However, 16 states experienced increases in nuclear generation within the year. 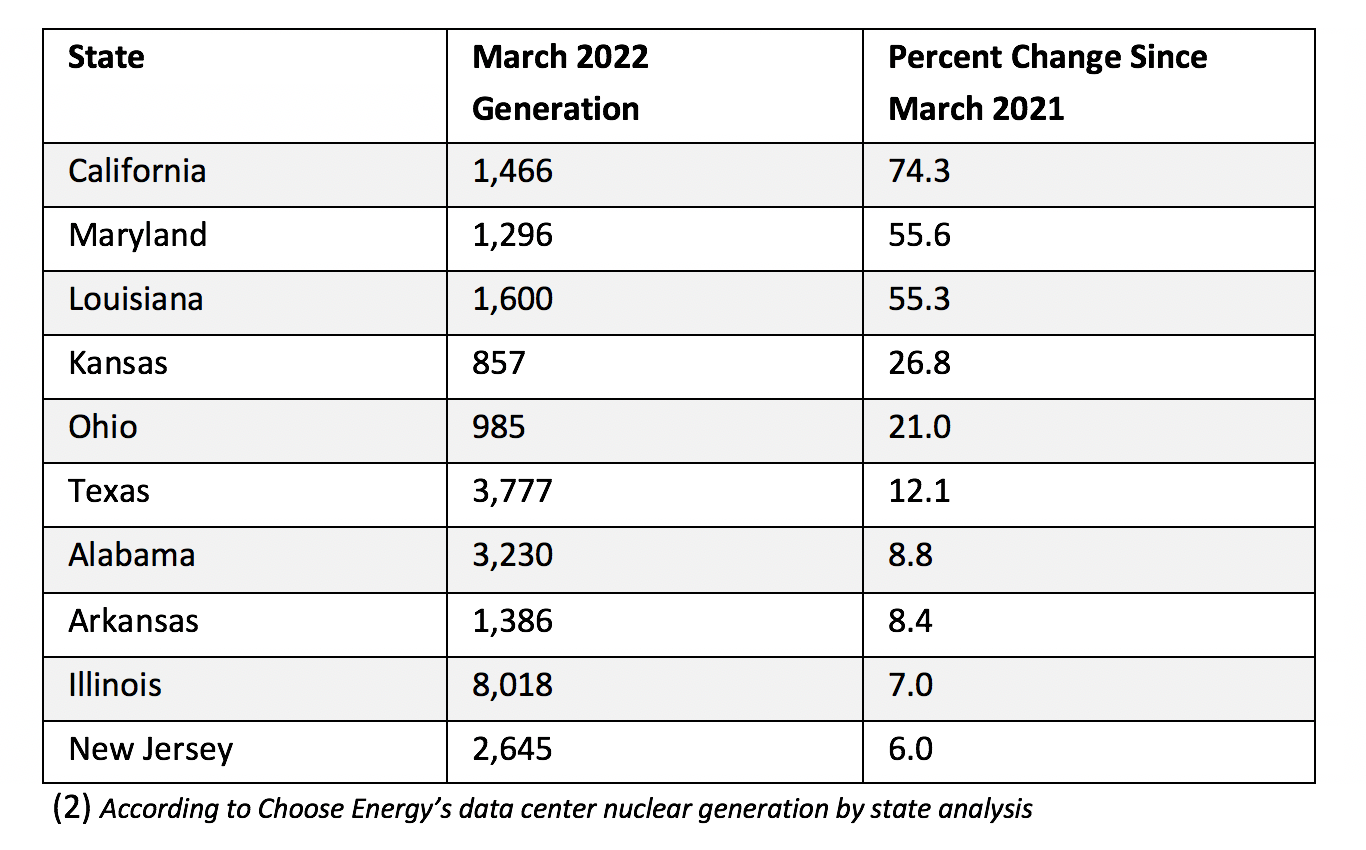 Policy changes, both federal and state, are looking to reduce emissions by at least 90% in the energy sector. The efficiency and technology of wind and solar is constantly improving, but both resources are still weather and climate-dependent. Recently, the North Sea has seen an exponential growth of offshore wind farms. As a combined effort of several European countries, this expansion should be considered a success, but not a long-term sustainable source of energy. When the North Sea’s wind dropped substantially, regional energy markets scrambled to pull from gas reserves. This caused a price surge before winter even began.

The U.K.’s offshore wind sector has successfully dropped emissions with enough energy to power 7.2 million homes, but as wind slowed and carbon credits rose to record high prices, the electric market experienced extreme volatility (3). The result of this volatility is an increase in gas and coal fire electricity plants in order to fill the gap and avoid an economic crisis like the one induced by a windless North Sea.

Without a reliable clean energy source, the energy transition is simply not feasible, and as suppliers face social and security pressures to offer more green options, nuclear will be coming into demand.

Nuclear energy, while one of the most reliable and clean options in the industry, does have its concerns. This is likely the reason so many states and legislators have pushed for funding to improve the technology of this source.

Nuclear waste, for example, is one of the biggest issues surrounding this energy source. One solution that innovators have created for this issue is to vitrify the waste. For this process, the radioactive material is converted to glass, locking harmful substances in a glass matrix, preventing them from leaking into the environment and reducing the chances of radioactive leakage.

Several countries including India, France, and the U.K. have reported carrying out this process for fuel recycling. Although the U.S. does not currently recycle fuel, it used to in the 1960s and ‘70s for the West Valley Demonstration Project and operators at Savannah River have been vitrifying weapons waste for 20 years (4).

Studies are still being done to examine the long-term effectiveness of this process and not all nuclear waste is fit for vitrification, but it is a step in the right direction and U.S. funding will improve the way this country handles nuclear waste.

Another interesting improvement of nuclear energy is in the fuel source. Currently, uranium is the most popular nuclear fuel. However, it is in high demand and, as nuclear energy expands, it will become more and more expensive to purchase, making nuclear the most expensive source.

Researchers have recently discovered thorium to be an alternative source of energy.

Thorium is more naturally abundant and can create fissile uranium-233 to be used in other types of nuclear reactors. The use of thorium has been studied for many years but finding ways to use this fuel in a cost-effective manner remains a challenge. Overall, there are many examples of solutions that research and development can offer nuclear energy’s problems and concerns. Therefore, government funding is so important to this industry.

The Bottom Line: Moving forward, the world will drastically need to increase its energy supply, especially clean energy. Energy suppliers constantly face obstacles and must remain ahead of the curve in order to stay competitive and successful in the industry.

Looking into alternative sources of energy, such as nuclear energy, is imperative for a supplier during the energy transition.

It’s important to stay on top of the industry, not only by observing what fuel mix you use and offer, but also by using the best CRM and maintaining a grip on customer relations, broker relations and how legislation will impact energy moving forward.

Contact POWWR if you’d like to learn more about how our platforms can keep you on the leading edge of carbon neutrality.

Brianna LaMorticella is a Marketing Associate at POWWR. She’s a recent graduate of Rutgers University, majoring in environmental science with a minor in physics, and is extremely passionate about sustainability and renewable energy.

Aaron Weisgerber is a Vice President of Sales at POWWR. For over seven years now, he’s focused on the energy industry at companies including Genie Energy, Talon Energy, Santanna Energy Services and Capital Energy Ohio.

DOE and utilities join forces for a stronger grid [VIDEO] 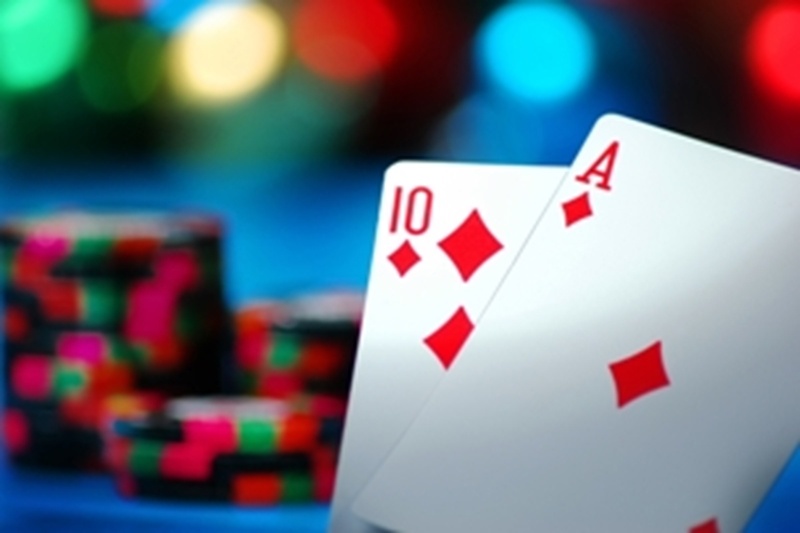